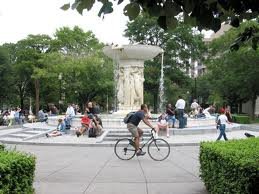 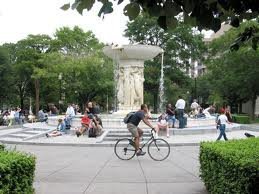 Dupont Circle is a historic district in Northwest Washington, D.C. With plenty to see and do, this cultural center is a popular destination for locals and visitors alike.

If your travel plans bring you to Dupont Circle, call Affinity Airport Sedan for a ride there. Our reliable, personal ground transportation service can do the driving; so instead of fighting traffic, you can sit back, relax, and enjoy the sights.

Despite being a part of Washington, D.C.’s  “Old City,” Dupont Circle wasn’t developed extensively until after the American Civil War when a flood of new residents moved into the area. The neighborhood was named after Samuel Francis Du Pont, a rear admiral during the war.

Dupont Circle quickly became an area of prominence with mansions and townhouses lining the streets by the 1880s. The British embassy was even built here in 1872. While there was a period of decline after World War II and the 1968 riots, the 1970s saw a time of resurgence, as the area took on a bohemian air and grew in popularity with the gay and lesbian community.

Today, Dupont Circle is a thriving area, with upscale shops, trendy coffeehouses, restaurants, and bars. In its center is a small park, which contains a central fountain, an abundance of seating, and permanent tabletop chessboards. The park is also a location for many rallies and protests.

The neighborhood is home to several research institutions, including the Brookings Institution, the Center for Global Development, and the Carnegie Endowment for International Peace. In addition, the Original Founding Church of Scientology; the Phillips Collection, the country’s first museum of modern art; and the Jewish War Veterans of the United States of America, America’s oldest veteran’s organization, are all located in Dupont Circle.

Annual events include Capital Pride, the nation’s fourth-largest LGBT festival, which is held each June and the High Heel Race, in which drag queens run a three-block race wearing high heels, that takes place each October.

Enjoy your time in Dupont Circle. And for all of your transportation needs, just call Affinity!

I’ve used Affinity on four different round trips to the airport. Jody is polite, on time, and most important, is a safe driver. When I’m relaxing or working on a trip to or from the airport, I don’t need to be in a NASCAR race or be ducking from near misses. Jody is an excellent driver. The van is clean and new. When I reserve a ride home from the airport, he has always arrived a couple minutes after I call to let him know I’ve arrived – never leaves me waiting. All this, and the price is a bit … END_OF_DOCUMENT_TOKEN_TO_BE_REPLACED