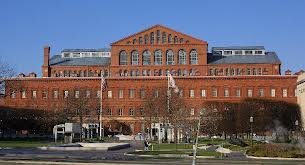 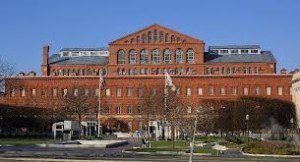 If you’d like to see all the National Building Museum has to offer for yourself, don’t fight bustling D.C. traffic to get there. Schedule a ride with Affinity Airport Sedan, and we’ll do the driving for you!

The National Building Museum operates out of the former Pension Bureau building. This brick structure was built in 1887 and is architecturally impressive. Its design is based on the Italian Renaissance. Stunning interior columns and an exterior frieze, it’s long stretch of sculpted decoration that depicts Civil War soldiers in action, are two of the museum’s many marvels.

The building was also designed to maximize airflow, before other methods of ventilation were created, by giving each office an exterior window and having it open to a large interior court as well. This huge open space has been used for inauguration balls, galleries, and speeches, and a Presidential Seal has been placed in the floor near the south entrance of the building.

By the 60s, the Pension Building was in great disrepair and was under consideration for being demolished. But conservationists fought back, and by 1969, it was listed on the National Register of Historic Places. The National Building Museum was created by Congress in 1980.

Today, the museum hosts lectures and exhibits about topics like innovation in parking design, green building, sustainable design, and notable architects. And youth programs work to educate students about design. In addition, the President and First Lady film the annual Christmas in Washington television special at the museum each year.

The museum’s gift shop has been recognized as the best museum store by numerous publications, including the Washington Post, the Washingtonian, and National Geographic’s travel blog.

Stop by to experience the National Building Museum for yourself. And for a lift there, just call Affinity!

I’ve used Affinity on four different round trips to the airport. Jody is polite, on time, and most important, is a safe driver. When I’m relaxing or working on a trip to or from the airport, I don’t need to be in a NASCAR race or be ducking from near misses. Jody is an excellent driver. The van is clean and new. When I reserve a ride home from the airport, he has always arrived a couple minutes after I call to let him know I’ve arrived – never leaves me waiting. All this, and the price is a bit … END_OF_DOCUMENT_TOKEN_TO_BE_REPLACED