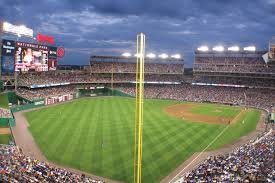 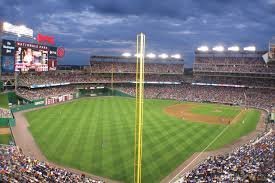 Nationals Park is the home ballpark for Washington, D.C.’s Major League Baseball team, the Washington Nationals. It holds the distinction as the nation’s first green professional sports stadium to be LEED-certified.

If you’re a baseball fan, or if you’re just interested in seeing the stadium for yourself, call Affinity Airport Sedan for a ride to the ballpark. Don’t fight congested game day traffic or worry about parking. Schedule a ride with Affinity, and we’ll get you there on time and worry free.

Located in Southeast Washington, D.C. along the Anacostia River, Nationals Park is in the city’s Navy Yard neighborhood. The park’s name is the same one used by the early-1900s team, the Washington Senators (and later renamed the Washington Nationals).

Construction on the facility began in 2006 and took less than two years to complete.

The park is owned by the Washington Convention and Sports Authority. It cost $783.9 million to construct and currently seats 41,418 people.

Special park features include a grove of cherry blossoms planted near the left field bleachers, as the trees are closely associated with the D.C. region. Many game goers also get spectacular views of the U.S. Capitol, the Washington Monument, and the National Cathedral. And fans enjoy the submarine dive horn, which sounds after every National’s homerun and with each win, in honor of the park’s Navy Yard location.

The first game played at the stadium was not a Nationals game, but rather a home game for the college team, the George Washington Colonials. They defeated Saint Joseph’s with a score of 9-4 on March 22, 2008. A week later, the Washington Nationals played their first game in the park, beating the Baltimore Orioles 3-0.

Baseball hasn’t been the park’s only draw. In April 2008, Pope Benedict XVI visited the capital and celebrated Mass with 47,000 people. Over 200,000 people requested tickets.

If you’d like to experience Major League Baseball in the District, swing by Nationals Park. And for a worry-free ride there, just call Affinity!

I’ve used Affinity on four different round trips to the airport. Jody is polite, on time, and most important, is a safe driver. When I’m relaxing or working on a trip to or from the airport, I don’t need to be in a NASCAR race or be ducking from near misses. Jody is an excellent driver. The van is clean and new. When I reserve a ride home from the airport, he has always arrived a couple minutes after I call to let him know I’ve arrived – never leaves me waiting. All this, and the price is a bit … END_OF_DOCUMENT_TOKEN_TO_BE_REPLACED