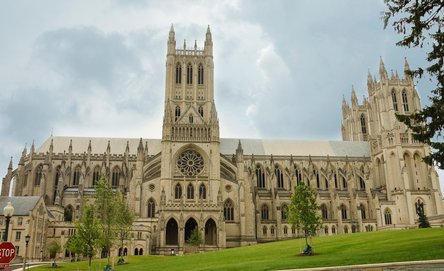 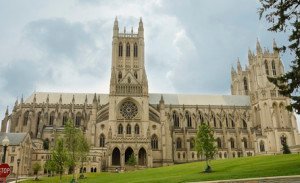 Formally the Cathedral Church of Saint Peter and Saint Paul in the City and Diocese of Washington, the Washington National Cathedral is an Episcopal cathedral located in Northwest Washington, D.C. It is the second-largest cathedral in the nation and six-largest in the world.

If you’d like to experience the Washington National Cathedral for yourself, call Affinity Airport Sedan for a ride there. Let our reliable, professional car service do the driving so you can relax and enjoy your trip.

Despite the fact that land was set aside for a great church in Pierre L’Enfant’s plans for the District in 1792, it was nearly 100 years later in 1891 when actual discussions began regarding a national cathedral. The Protestant Episcopal Cathedral Foundation of the District of Columbia received the charter to build the cathedral from Congress in 1893. Construction began in 1907 and officially ended in 1990, though decorative work is ongoing.

The Washington National Cathedral’s architectural design was heavily influenced by Gothic styles. As such, the structure is complete with vaulted ceilings, stained-glass windows, stone-carved decorations, flying buttresses, and pointed arches. The church’s Gloria in Excelsis Tower is the highest point in the city, sitting at 676-feet above sea level.

The edifice was constructed with several intentional flaws – a reminder that only God is perfect. Despite these flaws, the American Institute of Architects ranked the cathedral third on its 2007 List of America’s Favorite Architecture.

In addition to having held several prayer services for newly inaugurated presidents, including Franklin Roosevelt and Barack Obama, the cathedral has also held funerals for three presidents: Dwight Eisenhower, Ronald Reagan, and Gerald Ford. In addition, it was before the cathedral’s Canterbury Pulpit that Rev. Martin Luther King, Jr. gave his final Sunday sermon.

Today, four services are held each weekday, with five held during summer months. On Sundays, five services of the Eucharist are held.  Funding for building and maintaining the cathedral comes entirely from private support.

Enjoy your time at the Washington National Cathedral. And for a ride there, just call Affinity.

I’ve used Affinity on four different round trips to the airport. Jody is polite, on time, and most important, is a safe driver. When I’m relaxing or working on a trip to or from the airport, I don’t need to be in a NASCAR race or be ducking from near misses. Jody is an excellent driver. The van is clean and new. When I reserve a ride home from the airport, he has always arrived a couple minutes after I call to let him know I’ve arrived – never leaves me waiting. All this, and the price is a bit … END_OF_DOCUMENT_TOKEN_TO_BE_REPLACED